The general meaning of dance is rhythmic movements in a sequence of steps set to a melody, where the movements match the speed and mood of the music. The impact of dance at the physical level burns calories, strengthens muscles, increases flexibility, improves balance, and gives the heart a good workout. Dance has also been proven to uplift one’s spirit & increase cognitive development. There are many types of dance, popular among which are: Ballet, HipHop, Jazz, Folk, Tap, Irish, Modern, Swing, Contemporary and Ballroom.

Dance can be done for the sake of expressing an idea, or an emotion or simply for one’s  own delight. Thus, in dance, the body becomes a stylized instrument, and the dancer becomes a creator, as she transforms the formless time and space into forms, through skillful movements and energy.

Performing Arts of India is beyond Dance: Natya

The Performing Art of classical dances of India is rooted in the glories of beautiful & supreme Hindu Dieties, the rich stories of great personalities from epics, itihaasas, puranas, the yearnings of the devotee for Bhagavan, and also depict the truth of nature and scriptures. The art form seeks to unite with the limitless, beyond the limited mind and body and becomes a bridge between the finite and the infinite. This traditional type of Performing Art form of Bharat is thus called Natya, since it deals with all the remarkable aspects of dramatic representation – harmonious fusion of the art of theater, speech, music and dancing.

Legend has it that Lord Brahma, The Creator of Universe, Vedas and People, and member of Trimurti along with Vishnu & Shiva, derived from the primary four Vedas, the Natya Veda for the well-being of mankind. It was meant to be a play that could entertain while imparting inspiring values & virtues of life. Taking Recitation (patya; the literary content) from Rig Veda, Hymns,Music & Song (gaana) from Sama Veda, Histrionics (abhinaya; the mimetic art) from Yajur Veda and Sentiments (rasa, emotional content )  from Atharva Veda , Brahma evolved the fifth veda – Natya Veda!

The Lord said to the people, “This play is not merely for your pleasure or the pleasure of the Devas, but exhibits mood, Bhava for all the three worlds. This drama shall be the source of all counsel in matters of sentiments, moods & every rite; it shall serve as a timely resting place for those who are grieved, weary, unhappy, or engaged in arduous disciplines, it shall bestow righteousness, renown, long life, fortune and increase of reason, and it shall afford counsel to the world”

He taught the Natya Veda to Sage Bharata, who then authored the earliest expansive and authoritative treatise on dramaturgy – the Natya-Shastra. It is written in the form of a dialogue between Bharata and sages who approach him with questions about Nāṭyaveda (nāṭya= drama,performance; veda= knowledge). 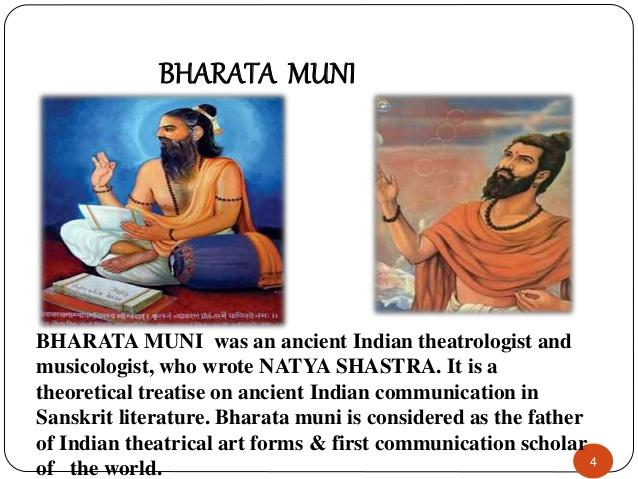 The Natyashastra नाट्य शास्त्र, is the oldest surviving ancient treatise on Performing Arts and the first comprehensive text of Drama, Music & Natya, marking the origin of the dramatic cultural tradition.

The original text of the नाट्य शास्त्र consists of 12,000 poetic verses – Dwadasha Sahasri, but the most read version in its condensed form has 6000 verses – Sat-Sahasri, structured into 36 chapters. It is said that the original version was known as Natya- agama and the shorter as Natya-shastra. The first complete compilation of the text is  dated between 200 B.C.E – 200 C.E.

“There is no knowledge, no sculpture, no wisdom, no art, no connection or no action that is not found in the performing arts” – says the Natyashastra

Śārṅgadeva शार्ङ्गदेव (1175-1247) was a 13th-century Indian musicologist who authored Sangita Ratnakara – the classical Sanskritam text on music and drama.

Śārṅgadeva’s interpretation of the Natya Shastra is regarded as a very comprehensive commentary.

According to Śārṅgadeva the commentators who set themselves the task of explaining or elucidating the Nāṭyaśāstra are Lollaṭa, Udbhaṭa, Śaṅkuka, Abhinavagupta and Kīrtidhara. Abhinava in his commentary refers in addition to Bhaṭṭa Yantra and Bhaṭṭa Nāyaka.

Among these early commentators of the Nāṭyaśāstra, Abhinavagupt aka Abhinava/Narasimha Gupta, is the most well-known.

After Bharata Muni received the Natya Veda from Lord Brahma, he produced the first Natya on the episode of Samudra Manthan, the renowned story of the victory of Devas over the Demons, for the flag festival of Indra – the king of Devas. This pivotal puranic legend glorifies the Kurma Avatar of Vishnu who helps in  supporting Mount Mandara -the churning rod, Vasuki -the churning rope, leading to the defeat of the Demons and the victory of the Devas who finally receive the nectar of immortality!

The story has also been the subject of many traditional paintings, sculptures, statues and has a tremendous influence on the socio-cultural ethos of some South Asian countries also.

In fact, an impressive statue of the Samudra Manthan greets people in Bangkok’s Suvarnabhoomi airport, and its carvings adorn the walls of Angor Wat Temple, Cambodia!

‘The southern section of the east gallery of Angkor Wat depicts the Samudra Manthan or the Churning of the Ocean episode. This carving represents 88 asuras (demons) on the left, and 92 devas (gods), with crested helmets, churning up the sea to extract from it the elixir of immortality (Amruta). The demons hold the head of the serpent Vasuki and the Gods hold its tail’

Pavithra Srinivasan is Research Fellow at Center for Soft Power, Chennai. She is an acclaimed Bharatnatyam dancer, and founder of Arsha Kala Bharathi.